On Saturday 24 March, the Men’s and Women’s first team took part in the inaugural university exchange with Massey University in Palmerston North. Match reports for each game can be found below.

The women’s game was played first. With the bad weather staying away and the pitch in perfect condition, both teams looked to play attractive football and control the tempo of the game. Chances fell to both sides in the early stages of the game, before Massey managed to find the break through in the 30th minute. With the goal spurring Victoria to push forwards, the lead did not last long, with a perfectly weighted through ball finding Eden Kleiman, who calmly slotted home the equaliser to level the scores at 1-1.

The second half continued where the first half left off. Victoria were feeling confident and playing well in the attacking half. Good combination play through the midfield and wide players created many opportunities. Having pressured Massey’s defence frequently, the winner was finally found when Claudia Wheler hit a belter of a left-footed volley into the left hand side of the goal. 2-1 to Victoria.

The goal to Victoria forced Massey to push forwards in order to try and find an equaliser. Under the added pressure, the Victoria defence was up to the challenge and stayed strong, with Izzy Boyd playing a key role in CDM, stopping any Massey counter attacks in their tracks.

2-1 the game finished, with Briar Mortensen picking up player of the day for an excellent performance at right centre back.

The team finished their pre-season with a 2-2 draw against Seatoun on Thursday 29 March and now look forward to the start of the season, which kicks off on Sunday 8 April.

The men’s game started at an electric pace, with Massey dominating the early stages of the game. Having come out of an early barrage without conceding any goals, Victoria adjusted to the speed of the game and started playing some good football. With a few chances falling for both teams, Victoria managed to score from a rebounded shot to make it 1-0. However, having just scored, it took no longer than 2 minutes for Victoria to concede, with Massey finding an equaliser from a very tight angle. 1-1 at the half-time break.

The game continued at a great pace. With on and off downpours of rain throughout, the game became a real battle for both sides. The game finished as a 1-1 draw, however, a friendly penalty-shootout was played out to provide some added entertainment for the crowd.

Taking both games into account, the aggregate score came out as 3-2 to Victoria University, meaning that they took away the shield for the year. Below are images of the winning women’s team and the captains of the women’s and men’s team holding the trophy (Renee Wadsworth and Simon Davies). Both clubs look forward to the fixture next year! 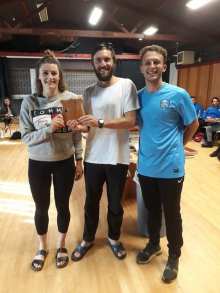